Breaking down barriers to funding for Canadian game studios
TwitterLinkedInEmail

How we make investments

Many game studios start out with relatively humble aspirations: build a business that pays collaborators fairly and brings a unique creative vision to life for players.

These types of small businesses need capital to get started, just like any startup. But venture capitalists (VCs) hunt for fast-growing companies that can provide an exponential return on their investments, and are uninterested in so-called “lifestyle” businesses. Further, many founders are unable to secure a traditional bank loan due to lenders’ low risk tolerance. Collateral and great credit are often required, and the amounts banks are willing to loan are too small to really help a growing studio.

So far, the best option for folks with a small studio in need of startup capital has been to bootstrap (self-fund through your day job, savings or early sales), scaling slowly, or raising money from friends and family. But not everyone has access to this kind of capital – the day job might not pay enough to leave anything on the table for the studio, you may not have savings, or your social circle might not include people who have the ability to loan you money.

We embrace these small studios with a long-term vision and no plans to sacrifice stability for growth. For our later stage studios, Weird Ghosts offers an alternative to VC and bootstrapping that not only provides our fund with financial returns that allow us to continually invest in new studios, but also recoup mechanisms that don’t eat into revenues and leave founders struggling in the early days.

How do we do that? We use something called a Shared Earnings Agreement (inspired by Calm Fund’s pioneering SEAL), which works by taking a capped percentage of earnings above an agreed-upon threshold. The idea is that once a founder begins to take a dividend above that threshold, a portion of that amount goes toward a total shared earnings cap (the total amount we recoup, set up front). This means operating costs are paid, and founders take home pay that meets their cost of living as soon as possible.

If a founder decides to eventually raise venture capital or sell the business, the SEAL may transition into an equity agreement. The remaining portion of the total shared earnings cap is converted into an ownership stake.

So how does it work? 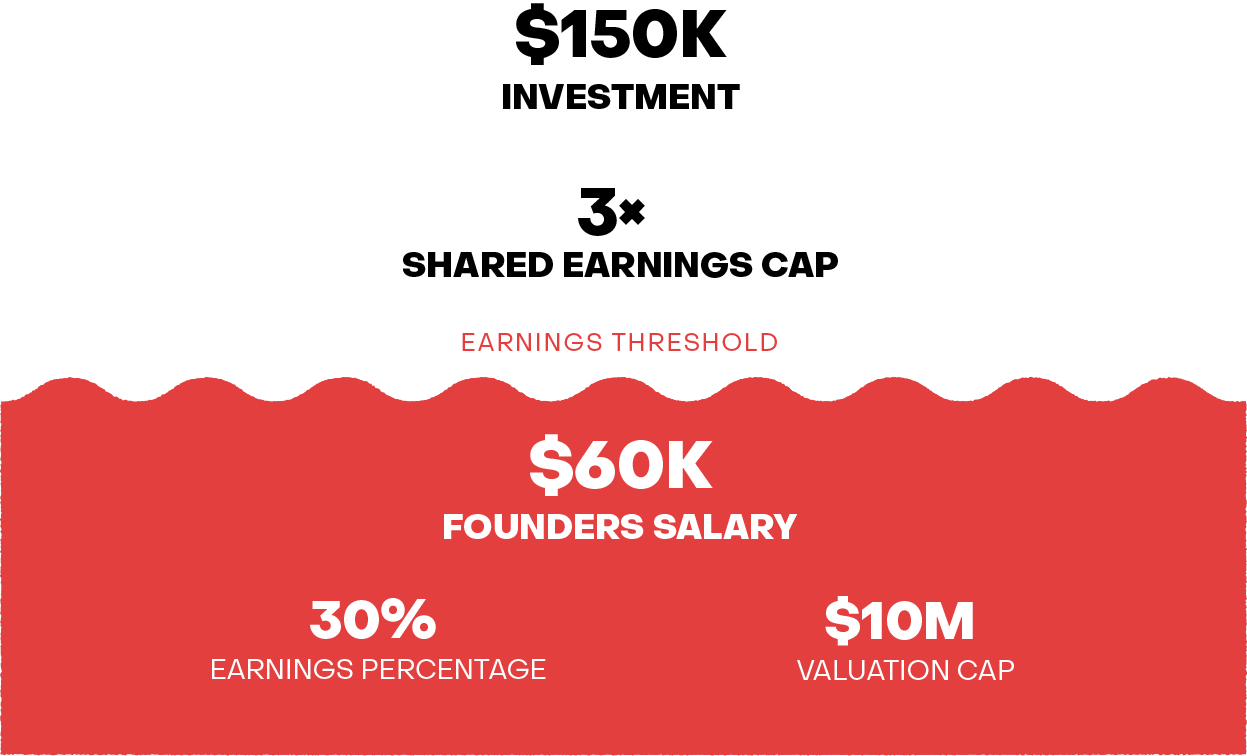 What happens if the studio decides to sell or take on other investment? At that point, the SEAL comes back into play. Whichever is greater – the remaining earnings cap or the initial investment of $150,000 converts into equity at the valuation set initially (for example, $10 million). Since our studio has fully paid the earnings cap, the investment converts to a stake of 1.5%.

Why use this type of agreement?

We want studios to make it in the long term. Our Shared Earnings Agreement aims to support profitable and growing studios, rather than extract revenue at the expense of stability – a hallmark of agreements that prioritize a funder’s or publisher’s recoupment.

As we deploy capital, we aim to work closely with our investees to hone this agreement into a shape that is as genuinely founder-friendly as possible.

If you have any questions about our funding structure or the Shared Earnings Agreement, please get in touch with us!